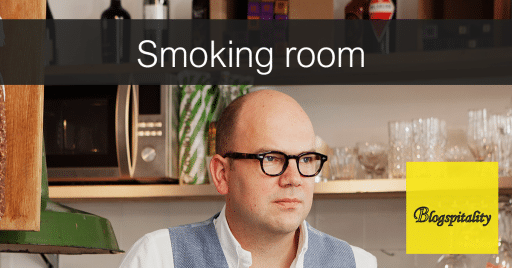 We go back home. We spent a few weeks on a tropical island, it was over. The last holiday-beer in an airport bar.

The bar on this airport borders the smoking room, just there. It is a wall of glass in the corner all the way in the back, that used to be part of the bar, now separated from the rest. At first glance it does not look unpleasant, a few high tables, the same colours on the wall. The only thing is it’s filled with smoke, which is the reason the people, tanned from their holidays, even look grey-ish.

Once in a while the door opens, and you smell the odour that used to be normal in cafés and bars a few years ago. The toxic cloud has slightly attached itself to the people who were just in that box, who just took a seat at a table in the regular area of the bar.

One of them smoked two cigarettes, quickly behind each other. She was in a bit of a rush, so she did not pleasantly take a seat, but completely focused on her cigarettes and on her cell phone. She was a stewardess, easily recognisable from her bright blue uniform with two stripes on it. Within five minutes she had left the box, and that is the moment it happened. A coughing fit. She couldn’t even continue walking; She was coughing her brains out. When she stopped she was overwhelmed by a second coughing fit accompanied by some gurgles. Luckily, she got back to breath after a while, to continue her walk to her flight. ‘Ready and well rested’ for a working day up in the air.

During the discussion concerning the smoking rooms I am always reminded about this incident. I don’t know what my opinion should be, but there are a few things that I do know: 1. What I saw was no marketing for the blue swan. 2. What I saw was totally not ‘sociable’. 3. What I smelled was absolutely gross. 4. Is it decent and respectful to accommodate a box that allows people to voluntarily make themselves sick?

The smoking ban in the Hospitality has made several people, including myself, healthier. If it would not have been there, I wouldn’t have quit, probably. Until 2008 I thought Hospitality and smoking were directly related to each other. Now I know better, and enjoy more air since a few years, even showering in the morning without coughing. Without the smoking ban in the Hospitality industry, I probably would have smoked a cigarette together with my beer on the airport. Common creature as I am.

How ‘annoying’ and ‘meddlesome’ and ‘insane’ the smoking ban might seem, there are plenty of health benefits for both guest as employee. It saves lives. By not naming and acknowledging these, the Hospitality presents itself – again – as an industry with too less eye for community and too much for own benefit.